The HORTISED project aims at demonstrate the suitability of dredged remediated sediments as an alternative for the preparation of growing media in horticulture.
The project will demonstrate the great potentials of sediment-based growing media through the growth of pomegranate and strawberry as representative plants at farm scale in Italy and Spain. The performance of the innovative growing media will be demonstrated by comparison with the typical production of the same fruits obtained with the use of the traditional peat-based growing media.
The HORTISED project will also highlight the current legislative and cultural reasons for hindrance in the use of innovative growing substrates in horticulture and will produce guidelines for the safe and sustainable use of sediments as ingredients of horticultural growing media.
The HORTISED project will demonstrate the suitability of sediments remediated with the technology developed in the AGRIPORT (ECO/08/239065/S12.532262) and CLEANSED projects to demonstrating the suitability of remediated sediments for fruit plant production at farm scale. In the AGRIPORT phytoremediation technology, the application of plants (shrub and grass species) in association with compost was able, in two years, to decrease contaminants and to improve the chemical-nutritional and biological properties of brackish and marine sediments. In addition, in the CLEANSED project, a further amelioration of brackish sediment characteristics was reached by two mouths landfarming process, making the sediment suitable for nursery activity.
On the basis of these previous experiences, in the HORTISED project the decontaminated AGRIPORT marine sediments, will be submitted to three months landfarming process in order to homogenize them and achieve better characteristics (structure, water holding capacity, aeration and biological activity) suitable for growing pomegranate and strawberries.
The main aim of this proposal is to apply the same technique on food species, namely in plant propagation (nursery) and in fruit production. Two model plants will be adopted for the demonstration trials: strawberry (a very flexible and precocious species easily grown in containers in both advanced farming systems and in home gardens, including city balconies and terraces) and pomegranate, a species suitable for Mediterranean environments very interesting as a source of fruits rich in active compounds. 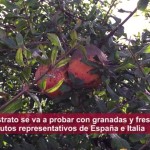